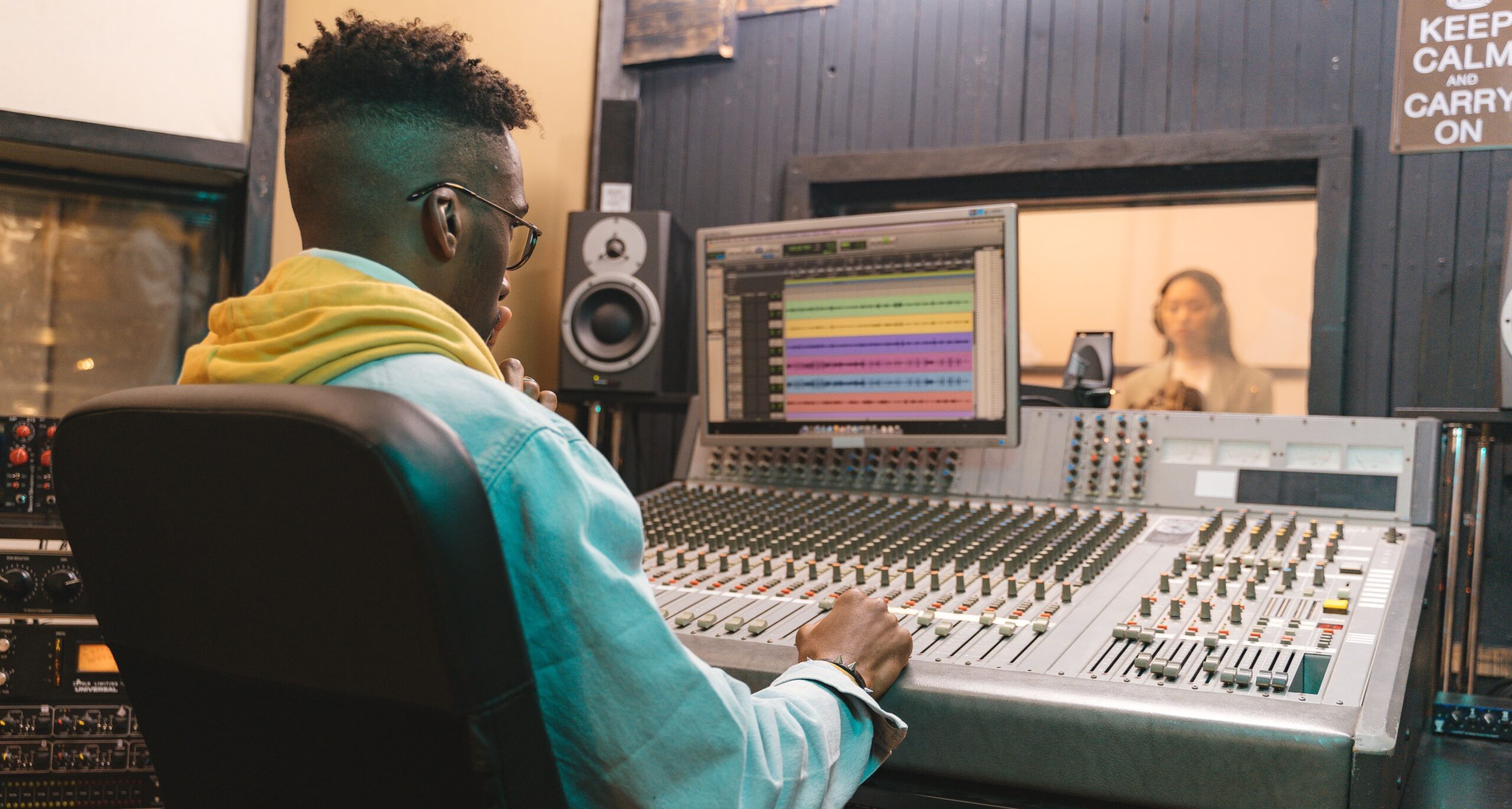 They say all men were created equal but some are more endowed than others, and some work harder than most. So also there are actual music producers, beat makers, vocal, sound, studio and mixing engineers.

Some music producers are good at simply making beats, some are at their best when recording an artist’s vocals and arrangements. Some are the best when it comes to engineering and mixing the sound, they hear what the producer doesn’t hear after being deafened by the same beat and vocals over and over again. Some can do all of the above and also the actual all round production, which includes directing the artiste on how to sing particular parts, add a bridge or where to take a breather, the key to use, where and when to double up, add ad libs and/or harmonies.

Most people think that everyone who makes beats is a music producer, well it depends on who you ask or your point of reference. But producing a beat doesn’t make you an all round music producer. Being a music producer takes much more than making beats, vocal arrangements, sound engineering or recording an artist’s vocals.

An all round producer is one who is able to take you through the paces of recording which includes lacing your vocals on a beat, the arrangement and all the other intricate details involved in bringing a musical recording to life, before it’s mixed and mastered. He knows how he/she wants the final recording to sound even before a mixing engineer works their magic.

There are producers that once they produce a beat it becomes a hit song that will win several awards and accolades even when it is not a commercial or viral success. In the same vein there are artists who once they voice or record on any beat no matter who the producer is, it becomes an instant hit record. It elevates the status of the producer if relatively unknown to a sort after producer and if already known, it further places her/him amongst the tried and tested hit making producers.

In Nigeria and Africa today we have a lot of talented/gifted and exceptional beat makers and music producers but there is a growing trend amongst artistes, especially here in Nigeria that I wanna talk about in this piece.

There are over 1000 producers in Nigeria and counting, some are well known and more in the limelight than their colleagues while others are virtually unknown until they make a hit track for an upcoming/emerging artiste or an already established one.

Most artistes, already established and upcoming, all like to work with known or what I will term tried and tested producers. No one wants to give that unknown untested producer the chance to show what they can do or to prove their mettle, especially when you are still a new struggling artist. Only a few artistes are willing to take chances and put their trust in the production skills of a relatively unknown or unheard of producer or beat maker. Even some established artists aren’t comfortable changing producers at random, they usually stick to the tested ones.

Some are able to do so either because they feel they have gotten to a point in their career that they can do anything and get away with it or because they are trying to cut costs or just because they are feeling a particular music producer at a specific  period or seeking to create a new sound or change things up with their sound, style or delivery.

Artistes often forget that just like any upcoming act seeks the opportunity and chance to showcase his/her talent or get airplay, so also a producer who is unknown desires the same, and even much more.

Most music producers find it difficult to work with upcoming artistes unless they can pay huge exorbitant rates, they prefer already tested artistes who even when they can’t pay them high rates, will earn them royalties via streams garnered.

Emerging music producers also find it hard to work with fellow upcoming artistes, they prefer already established artistes so they can showcase their skills and also make a name for themselves. They seek the limelight which in turn earns them steady income.

In Nigeria once an artiste “presumably” comes out of the blue with a hit song that becomes a street anthem everybody’s first question is, “Who produced the song”? What’s the producer’s name? Where is he based? They ask as if it really matters. Everybody now wants to work with him/her, especially the upcoming ones who now feel he/she holds the exclusive key to hit records.

In the past couple of years this trend has become increasingly visible even amongst established acts. So much to the detriment of loads of upcoming producers who are looking to showcase their talent but rarely get the opportunity.

Once in a while an artiste comes along who records several songs that when you listen to them all sound alike, have the same progression, tempo and BPM. The only difference is in the lyrics, but remove that everything else sounds the same and there’s nothing wrong with that. It simply means that the artiste has found his strength and is milking it dry and that’s totally allowed.

In my experience I have come to realize that different artistes record and voice in different ways and moods, so also certain producers bring out certain feelings/moods or have certain effects on some artistes. And this is the reason why they jell with particular artistes and vice versa and every time they collaborate or work together, they always make magic. After all, why change a formula that’s working well, why fix what isn’t broken?

The producer who knows the gimmicks that will make you give the best version of yourself in the studio every time, than to work with that known or overhyped producer who can only make the best beats but has no actual direction or ideas to communicate about the production or music/song itself .

Sometimes these known producers won’t have the time or patience to work with an upcoming artist simply because they are already fully booked or they have their mind set on another session with an already established act. In other cases they might feel it is a waste of their time and so will do a rush session to wrap up and get you out of the studio so another artist can record.

Other times some producers respect the already established big artiste and are so starstruck that she/he wants to work with them that they will fail to correct or be firm enough to actually produce and simply become mere studio engineers instead.

Some so-called producers are simply beat makers who know nothing about what actual production entails and so really have nothing in terms of production and direction to offer the artiste during their sessions.

If only some of our artistes can learn to take more risks, try out new or unknown producers, try new styles and be more innovators and trendsetters than mere followers, our vibrant and budding music industry will be the better for it especially now that we are getting more and more on the global music scene.

I always tell upcoming artistes, you do not really need to work with the celebrity producers or the known names to make a hit song, rather you should find the one who knows your vocal range, style, reach, who knows you and will be patient enough to allow you the time to get it right and still be firm enough to tell you to re-voice it or to do a re- take if he/she feels you need to do so.

Until artistes especially upcoming ones, learn that the most popular or known producer might not be the best for them, this will always be the case. I don’t have a problem with the “FOLLOW FOLLOW EFFECT” what I have a problem with is the resultant effect which is that all lyrics, beats and sometimes songs over a particular period sound alike and tend to follow a trend because everyone says “make me a beat like that one or I wanna do a song like that artiste.”

Nobody wants to be a trailblazer or pathfinder. None wants to take the risk of creating a new sound or style so the fans and listeners are subjected to cloned sounds/beats and an unending cycle of recycled beats, lyrics and punch lines.

This in turn leads to music that is only relevant when it’s trending and after a couple of weeks or months becomes boring and irritating to the listener. And that is the major reason why these days most music and artistes all kinda sound alike. It is also the reason why after a particular trend fades some artistes/producers find it difficult to hold their own or their spot and thus begin to struggle. And the law of  diminishing returns set in.

It is a joyful thing to see our music industry being recognized and making headlines on international platforms. I pray and hope that as our music continues to gain traction on the global stage and our musicians continue to garner attention and notice too, that they will begin to open up and try out new styles, new methods, new producers and perhaps also take more risks.

The limelight our Nigerian and African artistes are getting now has been long overdue and in the coming years can only lead to more opportunities for young upcoming artistes around Africa.

ARTISTE TIP OF THE DAY:

“Every time I agree to a collaboration or project with other artists, I am always committed and I give my all. I always get involved with every process aimed at promoting it. I make myself accessible for radio/TV interviews, shows or performances geared towards promoting the project too. I use all resources available to promote the project on every and all platforms that I have access to. Some artists find it difficult to do that.” –  AKON

Anyway, this is topic for another day

PREPARING FOR GREATNESS: Show Goes On No Matter What

The Basic Tenets Of Relationships (FRIENDSHIPS)

Dear Obidients I always come bearing news.
I know you are tired of this jobs that don't give much after jumping traffic and late nights.
Get yourself skilled and become valuable and important to the new Nigeria
Retweet this and check below

I love her, I really do, like she’s my second mum and we vibe so well but I see she’s getting older and often forget that I call her often than she remembers. Sigh. I understand.

I always know how our calls would go and I look forward to it.

out on our call for what happened a year ago, and I just listen. She doesn’t hide her feelings. Then she starts reminding me of the things I bought for her over the years and how she shows them off in church. Then comes the juicy gossips fresh off the vine 😂.